Record of the Victoria Cross – Britain’s highest medal for valour – from its institution in the Crimean War to the end of the Great War. Gives a full list of VC winnners and their biographies, and accounts of their heroic deeds.

This magnum opus is sub-titled: A Complete Record Of The Recipients Of The Victoria Cross From Its Institution in 1856, To The 29th October, 1920 With Descriptions Of The Deeds And Services For Which The Award Was Given And With Many Biographical And Other Details.’This remarkable work has been compiled from official publications – including the London Gazette – and despatches, letters from commanding officers and other contemporary accounts, and from information from private sources. The biographical details are often extensive. General Sir O’Moore Creagh certainly cast his net wide in gathering material, and it is particularly pleasing that he has been able to provide so many photos of the recipients, even the earliest among them. One curious omission concerns Noel Chavasse, the only man to be awarded the VC and Bar during the Great War. The author gives dertails of the second VC but not the first – only to note in the write-up for the Bar that he had been awarded the first VC for gallantry at Guillemont on the Somme in 1916, quoting the London Gazette, but giving no details for that action. At the beginning of the book the warrant instituting the VC is given in full, plus subsequent warrants affecting the award (in 1911, for example, King George V authorised the award to be granted to soldiers of the Indian Army). Although there have been a number of more recent publications covering VCs of the Great War, there is nothing to compare with this book as a record for the first fifty-eight years of the VC, and the work on the 1914-18 awards is a widely used source for later publications. This book is a must for any serious medallist and for anyone with an interest in the story of the highest award for gallantry – the Victoria Cross. There is an index of names. 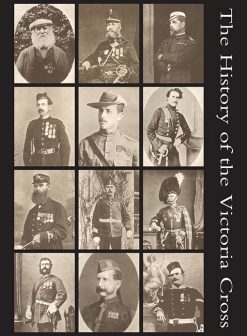