About The Naval & Military Press Booklists

The Naval & Military Press launched its first printed booklist back in 1990 and, including special issues, we have produced over 200 in the years since. The booklists contain the majority of our current special offers and new titles.

This downloadable version in PDF format can either be viewed and searched on screen, or printed and read at your leisure.

Adobe PDF catalogues
You will need Adobe Reader to view our printed catalogue, which is available free from the Adobe website.
Download Adobe Reader here 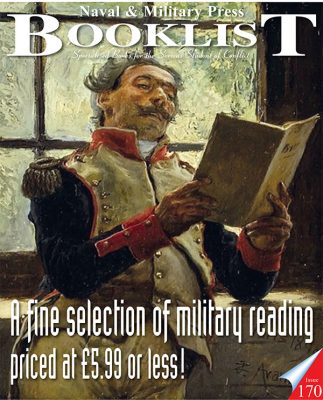 Now that our highly successful WINTER READING CAMPAIGN is coming to its conclusion, we are keeping the true value for money – or “bang for your bucks”, as our North American clients would call it – theme going with BOOKLIST 170.

With all of the 450+ titles priced at £5.99 or less, it will be easy to get carried away when ordering, all without stretching the bank account.

Some brilliant titles stand out – although to be fair there is not a dud amongst the whole collection in my opinion: ‘The Second Anglo-Sikh War’ at £4.99 is a real five-star account of a hard-fought and much-misunderstood war in Northern India during 1848-49, or for the Napoleonic aficionado ‘Artillery of the Napoleonic Wars’, again at £4.99, for a hardback looks too good to not put into your library. Wargamers are not forgotten, with selections from the ‘Century of the Soldier’ and ‘From Reason to Revolution’ ranges. The War in France and Flanders 1914-18 has some critically acclaimed books, and some that caused debate when published. Both our Naval and Aviation categories have some real winners, including Gerhard Koop’s books covering WW2 German naval vessels. Queen Victoria’s ‘Little Wars’ – always popular and especially so at our prices – are represented, alongside European conflicts of the 18th and 19th centuries. Delve back to ancient and medieval military history with the Greeks, Romans and Normans.

All in all, a well-rounded selection to help swell those bookshelves!