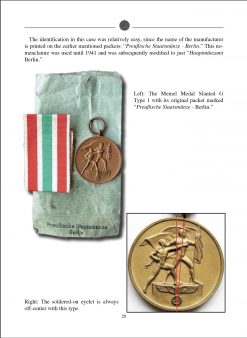 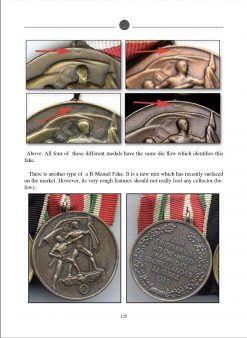 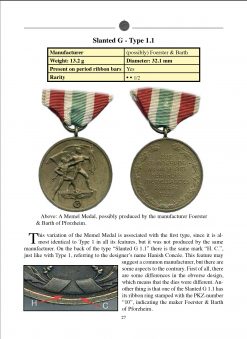 On over 150 pages the author Antonio Scapini presents not only all known original variations of this now scarce medal, but also shows all the known fakes. The history of the medal as well as the packages and the documents are also part of this useful book.

The Return of Memel Commemorative Medal (Die Medaille zur Erinnerung an die Heimkerhr des Memellandes 22. Marz 1939) was a decoration of Nazi Germany awarded in the interwar period, and the last of the series of Occupation Medals.
In the last bloodless action, Germany annexed the Klaipeda Region (Memel Territory) from Lithuania on March 22, 1939 after an oral ultimatum. On March 23 a peaceful occupation of the city and district was carried out by German troops who debarked by ship. This area of East Prussia, with 160,000 inhabitants, had been turned over to Lithuania in the aftermath of World War I following the Klaipeda Revolt and Klaipeda Convention of 1924. To commemorate the occupation the “Memel Medal” was authorized on May 1, 1939. It was awarded until December 1, 1940. In all 31,322 medals were awarded.
The medal was designed by Professor Richard Klein. While the obverse was the exactly the same as the previous two medals, the reverse read “Zur Erinnerung an die Heimkerhr des Memellandes 22. Marz 1939” (to commemorate the return of the Memelland on March 22, 1939), surrounded by an oak leave wreath instead of the Nazi Party slogan. The award was presented to all military, political and civil personnel who had distinguished themselves in actions related to the annexation of the district to Germany.
The medal was die struck with a bronzed finish and worn on the left tunic pocket suspended from a white ribbon with a green strip in the middle and two red strips on each side, the historic colors of Lithuania Minor] Overseas clients please note: Due to excessively high wrapped weight shipping is weighted on this title. 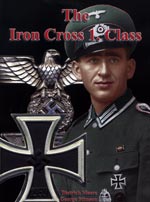 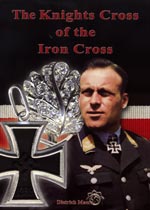 KNIGHT’S CROSS OF THE IRON CROSS