Classic early account of tank warfare. Major Watson commanded his company of tanks through the battles of Bullecourt, Passchendaele, Cambrai and Amiens to the breach of the HIndenburg Line. A must for all tank fans and very vividly written

The author of this classic account of early tank warfare, Major W. H. L. Watson, was already an experienced veteran whose early Great War exploits in the Cycle Corps he had recorded in his ‘Adventures of a Despatch-Rider’. Early in 1917, as this book records, damp, disillusioned and feeling that the tank might inject a touch of romance into the war, he volunteered and was accepted into the Heavy Branch of the Machine Gun Corps – which later became the Tank Corps. After a brief period of training Watson’s X! company was flung into action in April 1917 in the ‘blood-tub’ battle of Bullecourt. Thereafter, he also fought at Third Ypres (Passchendaele). But the core of the book is the author’s description of the battle of Cambrai in November 1917, when tanks were used en masse for the first time. He describes the initially successful breakthrough, and the subsequent German counterattack which won back almost a much ground as had been lost in the initial tank thrust. A vivid writer, Watson well records he extreme discomfort – heat, fumes, noise, splinters and general disorientation – suffered by the early tank crews. The remainder of the book describes the part played by the tanks in the final Allied counter offensive in 1918 from the battle of Amiens to the breaching of the Hindenburg Line. This is a hitherto rare but extremely valuable and well written account of the early days of the tank which must not be missed by any student of armoured warfare. 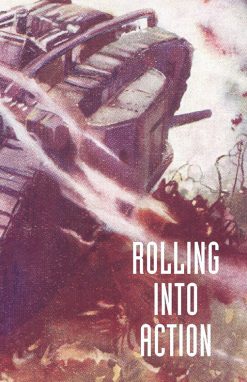 ROLLING INTO ACTION, MEMOIRS OF A TANK CORPS SECTION COMMANDER