This is a fully revised and reworked edition of Peter Warrington’s work that now extends to 2,482 pages, over three volumes against the 650 of the first single volume edition. It fills the last major gap for Gallantry medals to other ranks in the Great War, with the inclusion of Imperial troop recipients along with the British Army and Navy personnel, RFC and RAF, and the addition of London Gazette supplement reference number(s) and date(s). 74,000 records now have added biographical data and information relating to the award.

In the most part, the Military Medal was awarded to the privates and lesser ranks of the Army: “For a specific act of gallantry in action or for continuous gallantry during a specified period of active service.”

The Military Medal was instituted in March 1916 as an award for NCOs and men of the Army for acts of bravery, and was later extended to women who showed bravery under fire. There was also a provision for the award of a bar for each further act of bravery. All MMs issued to British personnel are named, usually in impressed capitals. All issued MMs have a notification in the London Gazette. It is rare to find a citation for the Military Medal in the Gazettes. It is possible that the reasons for the award will be found in the War Diary of the man’s unit (available on the Naval & Military Press CD-ROM, online and in printed book format). In addition, some details can appear in Regimental Histories and, very rarely, an original Divisional citation document that was given to the recipient will have survived. It is of interest to note that the first Gazette listing awards of the Military Medal (3 June 1916) included retrospective awards for 1914-15 and early 1916. 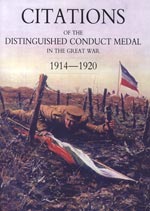