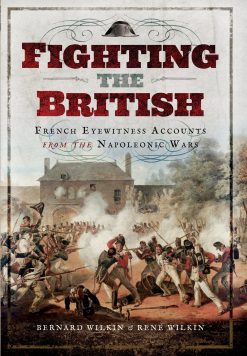 FIGHTING THE BRITISH French Eyewitness Accounts from the Napoleonic Wars

This is another great book by the authors of Fighting for Napoleon. Offering once again the French perspective, the writers explore the various campaigns that the French fought against the British during the Napoleonic Wars.

The British army during the Napoleonic Wars is often studied using English sources and the British view of their French opponents has been covered in exhaustive detail. However the French view of the British has been less often studied and is frequently misunderstood. This book, based on hundreds of letters, memoirs and reports of French officers and soldiers of the Napoleonic armies, adds to the existing literature by exploring the British army from the French side of the battle line. Each chapter looks at a specific campaign involving the French and the British. Extensive quotes from the French soldiers who were there are complemented by detailed notes describing the context of the war and the career of the eyewitness. Throughout the emphasis is on the voices of the lower ranks, the conscripts and the non commissioned and junior officers. They describe in their own words the full range of warfare during the period not only land battles but battles at sea, including the Nile and Trafalgar and accounts of captivity in England are included too.