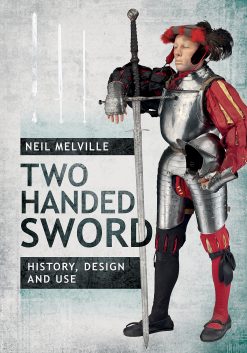 A well illustrated hardback 244 page reference book that primarily covers the era of the “birth” of the true two-handed sword in the late thirteenth and early fourteenth centuries to its decline in warfare towards the beginning of the seventeenth This is the period when the two-handed sword was in use in battle and whilst there is discussion of its use for prestige and ceremony, the bulk of the book is about the military sword.

The two-handed swords found in modern museums are often so large and elaborately decorated that the onlooker might question whether such an apparently impractical weapon could ever have been a serious weapon of war. Yet during the Late Middle Ages, although never numerous, such weapons could instil dread in those that faced them on the battlefield and in skilled hands posed a very real danger, being capable of inflicting fearsome wounds.

Neil Melville explains how, from the late-13th century, technological advances made the development of larger swords requiring both hands both possible and desirable. From their origins in Germany he traces their development and divergence into regional variations. He examines the evidence for their use on the battlefield over 300 years, most notably in the hands of the Swiss, the German landsknechts and the Scottish clans, before considering their later use in fencing and as ceremonial weapons.

Practical advice on fighting with the two-handed sword is also given, drawing on contemporary fencing manuals. The detailed and informative text is beautifully enhanced by dozens of illustrations. 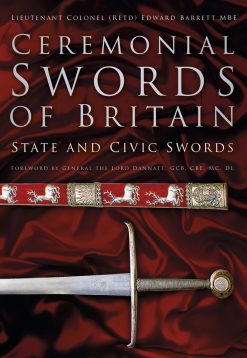