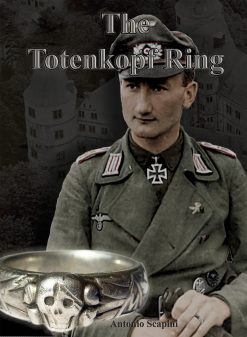 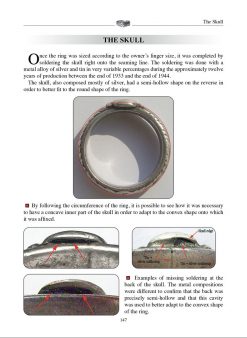 In his latest book author Antonio Scapini discusses and explores the famous Totenkopf ring of the SS in never before achieved depth and clarity. From the conception of the ring, the regulations, the material, the construction the topic is handled with the usual depth of the author and B&D Publishing books. Especially the whole procedure of the construction is finally resolved and explained. The final chapter by Fabio Stone Bet explains the background and meaning of the runes in extreme depth. The book has 288 pages and over 1000 photos, mainly in colour.

The SS-Ehrenring (“SS Honour Ring”), unofficially called Totenkopfring (i.e. “Skull Ring”, literally “Death’s Head Ring”), was an award of Heinrich Himmler’s Schutzstaffel (SS). It was not a state decoration, but rather a personal gift bestowed by Himmler. It became a highly sought-after award, one which could not be bought or sold. The SS Honour Sword and SS Honour Dagger were similar awards.
The ring was initially presented to senior officers of the Old Guard (of whom there were fewer than 5,000). Each ring had the recipient’s name, the award date, and Himmler’s signature engraved on the interior. The ring came with a standard letter from Himmler and citation. It was to be worn only on the left hand, on the “ring finger”. If an SS member was dismissed or retired from the service, his ring had to be returned.
The name of the recipient and the conferment date was added on the letter. In the letter, according to Himmler, the ring was a “reminder at all times to be willing to risk the life of ourselves for the life of the whole”.
Some SS and police members had local jewellers make unofficial versions to wear. In 1938, Himmler ordered the return of all rings of dead SS men and officers to be stored in a chest in Wewelsburg Castle. This was to be a memorial to symbolize the ongoing membership of the deceased in the SS order. In October 1944, Himmler ordered that further manufacture and awards of the ring were to be halted.Himmler then ordered that all the remaining rings, approximately 11,500, be blast-sealed inside a hill near Wewelsburg.[By January 1945, 64% of the 14,500 rings made had been returned to Himmler after the deaths of the “holders”.In addition, 10% had been lost on the battlefield and 26% were either kept by the holder or their whereabouts were unknown.