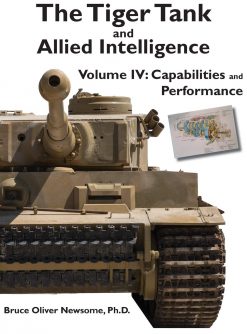 The German Tiger was dramatically more powerful than any other tank when deployed in 1942. Why were the Allies taken by surprise? How did the Germans employ Tigers while preserving their secrets? How did the Allies react? Was the Tiger a monstrous folly or ahead of its time?
“The Tiger Tank and Allied Intelligence” compares German designs and operations with Allied intercepts, interrogations, captures, estimates, and adaptations.
After 20 years of research in three countries, across 20 battle maps, 31 tables of data, 500 photographs and drawings, and previously unidentified first-hand accounts, these volumes reveal not just what the Allies knew but what the Allies missed, covered up, and distorted. Thus, we can learn more about the Tiger as it really was, rather than the hearsay that history books perpetuate.