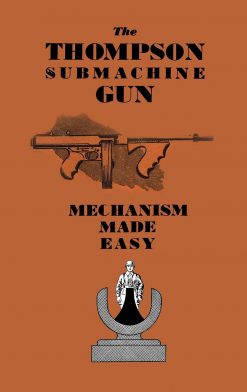 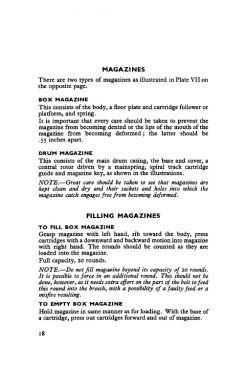 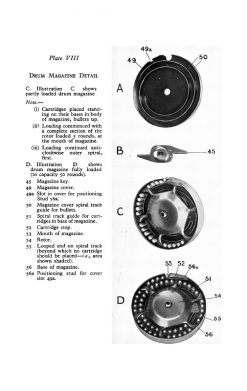 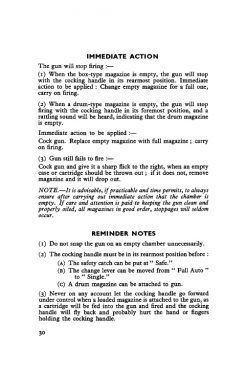 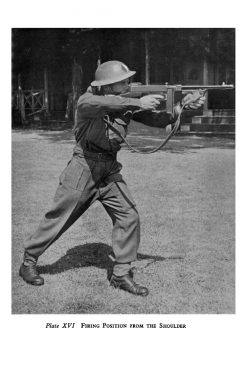 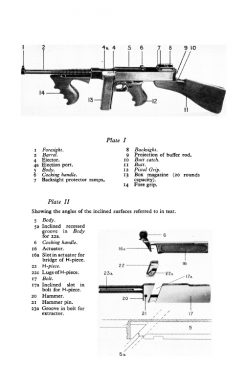 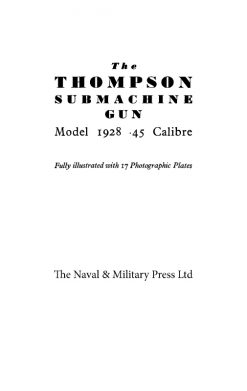 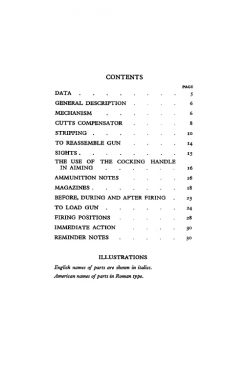 One of a series of Second World War booklets on weapons intended for the training of recruits, this treatise is dedicated to the venerable military type Thompson .45 calibre submachine gun. This model (M1928) had provisions for box and drum magazines. It had a Cutts compensator, cooling fins on the barrel, employed a delayed blowback action and its charging handle was on the top of the receiver. The booklet describes the correct loading and unloading of the gun; the action of the firing mechanism; the magazines; the action of gases and the cooling system and notes on how to deal with jams and stoppages.

The Thompson was used in World War II in the hands of Allied troops as a weapon for scouts, non-commissioned officers (corporal, sergeant, and higher), and patrol leaders, as well as commissioned officers, tank crewmen, and soldiers performing raids on German positions. In the European theatre, the gun was widely utilised in British and Canadian commando units, as well as in the U.S. Army paratrooper and Ranger battalions, where it was issued more frequently than in line infantry units because of its high rate of fire and its stopping power, which made it very effective in the kinds of close combat these special operations troops were expected to undertake. Military Police were fond of it, as were paratroopers, who “borrowed” Thompsons from members of mortar squads for use on patrols behind enemy lines.[The gun was prized by those lucky enough to get one and proved itself in the close street fighting that was encountered frequently during the invasion of France. Through Lend-Lease, the Soviet Union also received the Thompson, but due to a shortage of appropriate ammunition, its use was not widespread.