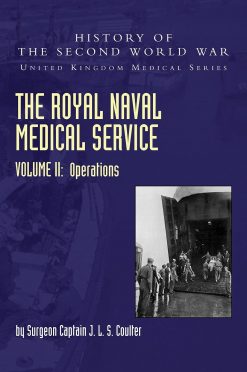 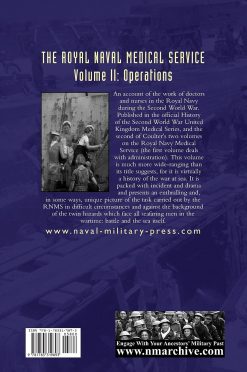 The second and final volume of The Royal Naval Medical Service War History deals with the medical aspects of the naval events of WW2, both afloat and ashore. It is a complete, and at times dramatic, account of the injuries that assailed the British Navy throughout the Seven Seas.
Topics include the events and losses of the Gloucester, Exeter, Dorsetshire, Cornwall, Hermes, Vampire and Hollyhock, the evacuation of Singapore, shipwrecked servicemen, the Boulogne raid 1942, Dieppe, Operation ‘Torch’, the Normandy landings, and ‘Kamikaze’ attacks. All are presented in reliable, non-scientific and readable terms.

An account of the work of doctors and nurses in the Royal Navy during the Second World War Published in the official History of the Second World War. United Kingdom Medical Series, and the second of Coulter’s two volumes on the Royal Navy Medical Service (the first volume deals with administration). This volume is much more wide-ranging that its title suggests, for it is virtually a history of the war at sea. It is packed with incident and drama and presents an enthralling and, in some ways unique picture of the task carried out by the RNMS in difficult circumstances and against the background of the twin hazards which face all seafaring men in the wartime: battle and the sea itself.