In the spring of 1945, with the Second World War undoubtedly nearing its end, events followed in rapid succession. There was fighting on every front and German losses were enormous. Units were created and destroyed without receiving much attention in the records of the Wehrmacht staffs. Even veteran units suffered this fate. This book, the product of ten years of research, documents the battles and demise of a panzer unit which, though it fought on the Oder Front and in metropolitan Berlin, remains almost unknown – the I Battalion, Panzer Regiment “Brandenburg.”

Created in spring 1945 through the renaming of the I Battalion of Panzer Regiment 26. The latter had seen action, usually attached to the Panzer-Grenadier Division “Großdeutschland,” at the hotspots of the Eastern Front from January to October 1944. The Panthers had fought at Cherkassy, in the Memel bridgehead and the battles in Hungary. The unit’s existence would span just three and a half months; consequently it is almost unknown today. At the beginning of February 1945, the I Battalion of the Panzer Regiment “Brandenburg” was dispatched to the Oder Front and attached to the Panzer-Grenadier-Division “Kurmark.” Fighting as part of that unit, in spring 1945 the battalion took part in the fierce battles at the Soviet bridgehead near Göritz south of Küstrin and for possession of the Reitweiner Sporn and the Klessin strongpoint. The “Brandenburg” Panther battalion was always in the middle of the battles against the overpowering Soviet enemy. After the big attack by the Soviets on 16 April 1945 and the battle for the Seelow Heights, at the end of April the remnants of the battalion with 14 Panthers found themselves in the Halbe pocket with the 9th Army. In the fierce fighting that accompanied the break-out, a small number of Panthers succeeded in breaking through to the west. Many members of the battalion were killed in the Halbe area or were captured by the Soviets. Without fuel and ammunition, the battalion’s last four Panthers were abandoned near Beelitz south of Berlin. Most of the battalion’s survivors crossed the Elbe near Tangermünde and were taken prisoner by the Americans. The book describes in detail the history of I./Pz.Rgt. 26 in the east as part of the Panzer- Grenadier-Division “Großdeutschland” and the costly battles as Panther Battalion “Brandenburg” in 1945. The book captivates through the intensity with which the events are documented, including firsthand accounts by eyewitnesses. It is thus a piece of contemporary history that gives the reader a sense of what it was like to be there.
The book has a German cover, but the content of all Luftfahrtverlag-Start’s books is dual English & German.
Overseas clients please note: Due to excessively high wrapped weight shipping is weighted on this title. 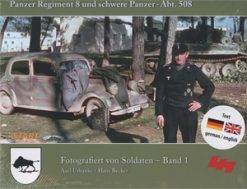