The story of Ted Taylor, 1st Battalion, The Rifle Brigade, who was sent to France in May 1940 as part of Calais Force. He was captured after a few days of incredible hardship and survived in difficult captivity until the end of the war.

Ted Taylor, 1st Battalion, The Rifle Brigade, was sent to France in May 1940 as part of Calais Force. Initially sent to open up supply lines to the rapidly retreating BEF, they soon found themselves defending Calais against the might of the 10th Panzer Division. Outnumbered by at least three to one they held out for 4 days until they ran out of ammunition and were forced to surrender. For the next five years Ted found himself part of the huge slave labour force in Poland under the administration of Stalag XXA and Stalag XXB. Life in the POW camps bore little resemblance to the cheerful films of the 1950s with casual brutality never far from the surface. As 1945 began and the war entered its final bloody phase, the POWs dared to believe that at last they might be going home. But fate had one more cruel trick to play. As the Russians approached rapidly from the east, the terrified Germans evacuated the camps and, in temperatures below -25c, began marching the malnourished, poorly-clothed POWs back across Europe. The infamous ‘death marches’ to freedom across the frozen, chaotic, war ravaged landscape of Eastern Europe had begun. 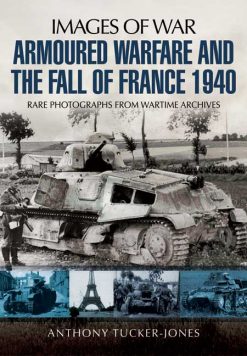 IMAGES OF WAR: ARMOURED WARFARE AND THE FALL OF FRANCE 1940