Every aspect of the bloodiest battle ever fought by the British Army is examined in this searching book, which compiles information from a multitude of sources to portray each phase of the Somme offensive, from the disastrous opening day to the long, slow battle of attrition to wear the enemy down. A comprehensive effort by an experienced author. The aim is to provide a military history of the Somme campaign mostly free of the sentiment of endless first person and diary accounts of how traumatic it was as ,there are many such books available for that.

The five and a half month long Somme campaign in the summer and autumn of 1916 was a defining moment in the history of the British Army. From the disastrous opening day on 1 July to the final attacks in November, each large battle and minor action is given equal treatment in these pages.
The book concentrates on the British Army’s repeated efforts to first break through the enemy lines,and then to wear down the Germans in a bloody war of attrition. By compiling information from the Official History and the printed histories we get a balanced view of the British side of the lines.
There is plenty of information on the reasoning behind each battle and the objectives. There is discussion on artillery bombardments, tactics, zero hours, the terrain, and insights into the successes and failures of each attack. Over ninety new maps chart the day by day progress of Fourth and the Reserve Army across the r battered chalk downs of the Somme battlefield.
Together the narrative and maps provide an insight into the British Army’s learning curve during that fateful summer; a process which set the scene for future battles on the Western Front. We can see the hard lessons learnt and the solutions used to solve a multitude of problems, from communication and all arms co-operation, to the inclusion of tanks and the growing role of the Royal Flying Corps.
Where possible, the men who made a difference are mentioned; those who lead the assault companies and bombing teams, those who cut the wire and led the survivors into the German trenches, those who stopped the counterattacks and those awarded the Victoria Cross.
Discover the real Somme campaign fought by the British Army and learn how its brave soldiers fought hard to achieve their objectives. 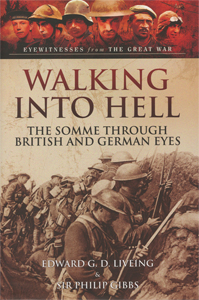 WALKING INTO HELL The Somme through British and German Eyes