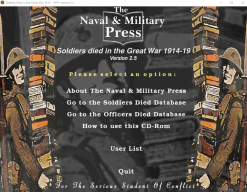 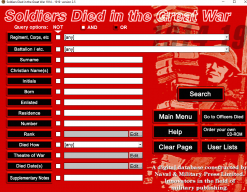 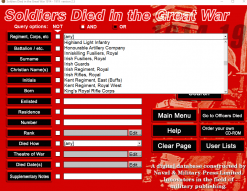 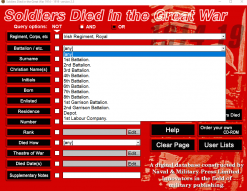 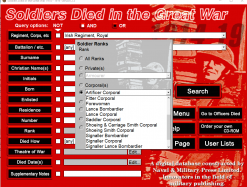 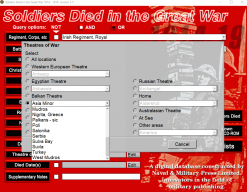 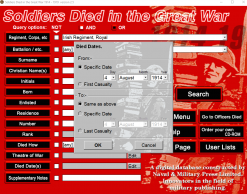 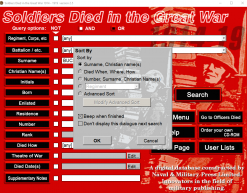 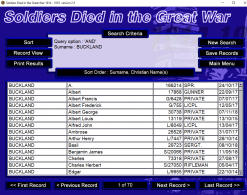 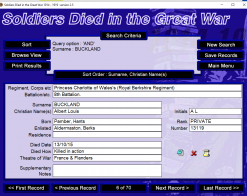 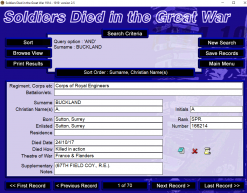 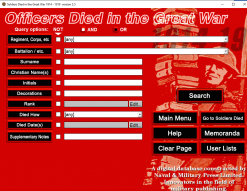 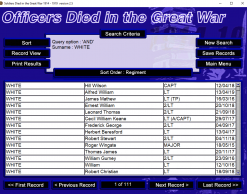 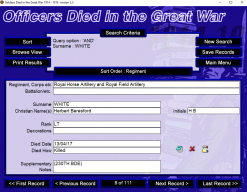 A complete and searchable digital database of Soldiers who Died serving in the British Army in WW1.

There can hardly have been a family in Britain which was not touched in some way by the tragedy of the First World War, the “Great War for Civilisation”. Great Britain, alone among the major European nations, went to war in 1914 with an army based on voluntary enlistment, numbering just over 247,000 at the outset with 486,000 Reserves and Territorials. By November 1918 almost a further 5,000,000 had enlisted, over half of them volunteers. For the first time since Napoleon, Britain had become a nation in arms and, in January 1916, for the first time in the country’s history, conscription was introduced. The war developed into one of attrition as the allies strove to break through the formidable enemy defences and, by the end, casualties on both sides were on a scale hitherto unparalleled. In 1921, 81 volumes embracing every regiment and corps of the British Army were published listing almost 662,000 Soldiers and 41,000 Officers who died in the war, and it is this immense undertaking which is published by The Naval & Military Press on one fully-relational CD-Rom.
First issued in 1998, its fully searchable format allows flexible interrogation of over 703,000 records.
Its publication rewrote the rulebook and placed the Naval & Military Press in the forefront of serious military publishing. This highly-acclaimed CD-ROM has gone on to sell several thousand copies.
Since publishing the original Version 1 disk in 1998, Version 1.1 in 1999 and version 2.0 in 2004, operating systems have advanced significantly, so we have taken advantage with this new pressing of the disk to make substantial and worthwhile improvements. Geoff Bridger, the editor of Soldiers Died in the Great War CD-ROM, has been working with the raw data since Version 1 was produced and we have now been able to incorporate many corrections to the original data. A complete overhaul of the functionality has been carried out by XRM, the database engineers, under the guidance of Geoff Bridger, and Version 2.5 incorporates many features and improvements that existing users have requested.

FUNCTIONALITY
• Important addition of a Note Pad feature for each record enabling your own notes to be added, edited and printed with main record.
• New facility to search using the powerful Boolean Operators, ‘And’ ‘Or’ ‘Not’ thus providing far greater flexibility.
• Date of death search facility improved.
• Facility to save and merge search results and subsequently recall all data when required.
• Facility to delete chosen records from search
result prior to saving.
• Facility to delete previously saved records from personalised list.
• Advanced sort features allow you to order by chosen consecutive preference over the 15 search fields.
• Facility to transfer saved searches and Note Pads between computers.
• Simplified and easier to use indices for Regiments, Theatres of War, and Ranks.
• Victoria Cross now standardised to ‘VC’ to avoid wild card searches also giving cases of R.A.V.C. (Royal Army Veterinary Corps) and A.V.C.
• Search screen appearances tidied up and improved.
• Inclusion of Safe Disk™.
• Rewritten comprehensive guidance notes on how to get the very best from the CD-ROM.
• Redesigned packaging and disk face.
• Lifetime accidental damage warranty, conditions apply.

By using digital technology The Naval & Military Press have created a permanent and substantial record of those who fell during the years 1914 – 1919, when The Great War was taking its heavy toll on the British Army, and this will now be available to future generations in an easily accessible format.
“Lest we forget”.

Recommended System Requirements: The recommended system requirement is a Pentium III PC with 48X CD-ROM drive, 512MB of RAM and an SVGA monitor.

Price + VAT (VAT is applicable to all UK orders)