An exhaustive transcription of the War Diaries for all the front line units that the authors can identify as having gone over on the morning of 1 July 1916.
The authors have drawn together, for the first time ever, all the War Diary entries for those battalions that went ‘over the top’ on 1 July 1916. Written as the events of that terrible day unfolded, or immediately afterwards, the diary entries are the words of the survivors, painstakingly transcribed from the original hand-written documents. Together they form the most comprehensive and unique narrative of “The First Day Of The Somme” – a day which even now still touches so many families both in the United Kingdom and around the world.

At 07.30 hours on 1 July 1916, the devastating cacophony of the Allied artillery fell silent along the front on the Somme. The ear-splitting explosions were replaced by the shrill sound of hundreds of whistles being blown. At that moment, tens of thousands of British soldiers climbed out from the trenches on their part of the Western Front, and began to make their way steadily towards the German lines opposite. It was the first day of the Battle of the Somme.
By the end of the day, a number of the battalions involved had met with some degree of success. Others had suffered heavy losses for no gain, whilst a few quite virtually ceased to exist. On what is generally accepted as the worst day in the British Army’s history, there were more than 60,000 casualties – a third of them fatal.
o have all the battalion war diaries in one volume of each battalion that went over the top on the 1 July 1916, during the opening day of the battle of the Somme is, good news.
Of particular interest to anyone who has an ancestor who took part in that significant day in British history.
When making a pilgrimage to the Somme to walk in their ancestors footsteps it provides accounts of the action along the entire front attacked from Gommecourt in the north to Montauban in the south.
This is required reading for anybody interested in the most disastrous day ever experienced by the British Army when they lost an unprecedented 57,470 casualties in a single day.
Each diary is placed in their entirety next to each other within their Corps, and contains accounts of the operation, written shortly after it had happened,this is compelling reading. 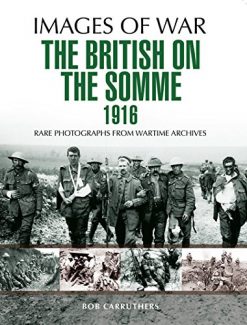 IMAGES OF WAR BRITISH ON THE SOMME 1916