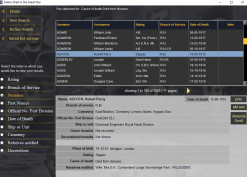 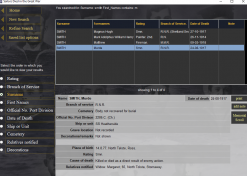 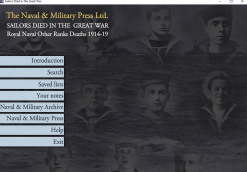 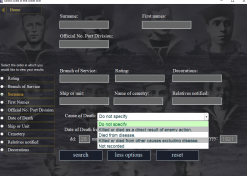 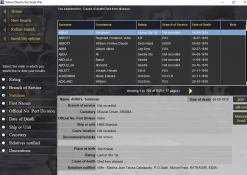 Are you a family historian, trying to find what happened to a relative in 1914-1918? Or perhaps you are researching a local war memorial. The problem has been that only the Army casualties were digitised in 1999 by N&MP leaving a blank with the Sea and Air servicemen – Now the British Sea and Air Services of the First World War are digitised and available from N&MP to complete this large and frustrating gap.
This database Complete on one fully searchable CD-ROM gives details of naval other ranks deaths in service during the First World War. The original records are held by The National Archives and are in a perilously damaged state. Naval & Military Press have had these fragile documents carefully transcribed and checked. Statistical detail for all data fields is easily accomplished, allowing casualties for sea battles and ship and submarine, or the whole (or part) of the war to be analysed date by date as never before.

Almost 45,000 Royal Navy sailors lost their lives in the Great War and sadly, for most, the sea is their last resting place. Those without graves are mostly commemorated on the huge naval memorials at Chatham, Portsmouth and Plymouth. Despite the number remaining at sea about 36% are buried ashore, in mostly named graves, and all over the world. Many sailors fought alongside their chums in the army on battlefields as diverse as Gallipoli, Russia and the Western Front. Many others died in the United Kingdom and that is where they were buried.
Aside from their full names, rating, number, branch of service, name of ship or unit, decorations etc., other valuable information is usually available. The date and cause of death, location of their cemetery and reference of grave (where applicable) is shown together with the name and address of the relative notified of the death. This last item will be especially useful to genealogists. There are many surprises, such as submariners buried in Baghdad and men in the Armoured Car Division buried in Russia. One gem, noticed among the records describing a grave, is “Buried [in] East Africa on a small knoll marked by blazed tree, R. bank Kaibiga River, 100 yards W. of Ndyimbwa-Ungwara.” For those lost at Gallipoli there are often detailed descriptions rather than traditional locations for the grave.
Price + VAT (VAT is applicable to all UK orders)