MICHAEL LEE
18:55 03 Mar 19
I have been a very happy customer of Naval and a Military Press for many years. I have... never been disappointed with their products or very professional service. With easy options for payment and an unrivaled selection of military books, brilliant CD Roms and DVDs, I really can’t imagine why anybody who loves military history would even contemplate going elsewhere.read more
Next Reviews
-88%
Add to Wishlist

Pioneer Battalions in the Great War traces the reasons behind the creation of these units, the work they performed and the dramatic transitions many of them had to undergo. It also examines how and why Pioneers have never received the recognition they deserve.

Pioneer battalions, created as an expedient in 1914, were a new concept in the British Army. Intended to provide the Royal Engineers, with skilled labour and to relieve the infantry from some of its non-combatant duties, Pioneers became the work horses of the Expedentiary Forces.
The Coldstream Guards and over three dozen Country regiments, each created at least one pioneer battalion. Several New Army battalions were raised specifically as Pioneers, while others were converted Territorials or Kitchener units formed originally as conventional infantry. Adopting a badge of a cross rifle and pick, these battalions wired, dug and reverted in all weathers and in all terrain. On many occasions they abandoned their working tools and fought alongside the infantry in repelling enemy attacks. In their efforts to stem the German offensives of 1918, several Pioneer units fought themselves to virtual annihilation
Often confused with the Pioneer Corps of the Second World War, the work of the Pioneer battalions has been largely ignored or misunderstood. Far from being the units of the ages and inform, these sixty-eight battalions played a major role in the Allied victory.
Pioneer Battalions in the Great War traces the reasons behind the creation of these units, the work they performed and the dramatic transitions many of them had to undergo. It also examines how and why Pioneers have never received the recognition they deserve. 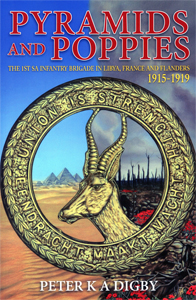