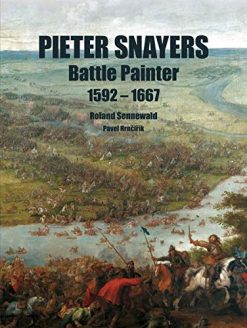 Pieter Snayers’ works are on display in numerous collections world-wide. With the help of his paintings, many of which are very large in format, this lavishly illustrated book seeks to relate the history of the conflicts depicted. Author Roland Sennewald has compiled a collection of more than 100 of Snayers’ works from all over the world, creating an impressive testimony of his creative talent and relating the story of both the Eighty and Thirty Years Wars, and the times before and after.

It remains a stroke of fortune that in the turbulent times of the 17th century with its numerous cultural and military upheavals the artistic depiction of human life took a similarly rapid and proliferous development. Never before in history had society in all its squalor and splendour been presented in so many pictures of outstanding artistic quality. At the end of the 16th century the Golden Age of Painting began to evolve especially in the Low Countries. Many contemporary paintings also show events from the Eighty Years War, the United Provinces’ struggle for independence from Spain. However, an entire generation of artists also chose to paint events from the great European conflict which erupted at the same time: the Thirty Years War.
Born in Antwerp, Pieter Snayers was a fairly typical representative of this generation of painters. From a military historian’s point of view, his works are considered particularly authentic. Many of his paintings showing sieges betray meticulous care in the depiction of the cities and fortresses concerned. Snayers’ topographical and analytical approach remains unsurpassed. Even his paintings of major battles (which rarely occurred) defy any form of profound criticism. Snayers’ rendering of the everyday life of the common people involved is straightforward, graphic and occasionally dramatic. We are thus able to gain insight into the events of his time unimpeded by clichés and historic myth.