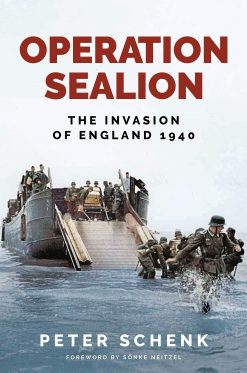 OPERATION SEALION The Invasion of England 1940

Was the projected invasion of Southern England by German forces in 1940 a real threat and, if launched, would it have been successful? Historians continue to debate this subject to this day. Notwithstanding, this work provides a valuable reference work for all with an interest in the evolution of amphibious warfare. Interestingly this hardback 255 page work outlines the pioneering techniques developed by the Germans to carry their Armed Forces, and goes into great detail in describing the vessels that were designed, developed and prepared for Sealion. Whist some were converted cargo vessels and steamers the Germans also built specialised landing craft and adapted barges and pontoon boats as well as tugs and other ancillary ships for the operation.

It is hard to believe that in the summer of 1940, neither the Allies nor the Axis powers had any experience of large amphibious operations. German planning for Operation Sealion was concerned with pioneering new techniques and developing specialised landing craft. Remarkably, in only two months they prepared an invasion fleet of 4000 vessels. In Operation Sealion, Schenk begins by analysing and describing the vessels that were developed and deployed for the operation: converted cargo vessels and steamers, more specialised landing craft, barges and pontoons, and auxiliary vessels such as tugs and hospital ships. He then goes on to outline the strategic preparations for the landing and looks at the operational plans of, in turn, the navy, army and airforce. The planned invasion is described in full detail so that the reader can follow the proposed sequence of events from loading, setting sail and the crossing of the Channel, to the landing and the early advances into southern England. Schenk uniquely estimates the chances of success.