The first volume describes events leading up to war and the organization of the three British fleets in Home Waters and the disposition of the coastal Destroyer Flotillas such as the Dover Patrol. It deals with the opening movements on the outbreak of war in Home Waters and in the Mediterranean and the passage of the BEF to France. It describes the Heligoland Bight action and the loss of Hogue, Aboukir and Cressy, sunk by a U-boat in the North Sea, and of the battleship Audacious, sunk by a mine on 27th October 1914 off the coast of Donegal but without loss of life. She was the first battleship of any nation to be sunk in the war. It deals with operations on the Belgian coast in October 1914 and the First Battle of Ypres. Further afield it describes the commencement of the Cameroons Expedition, 15 August to 15 October and then turns its attention to the Far East, the exploits of the Emden, the operations of von Spee’s squadron, the Battle of Coronel and the Falklands where the book ends. Appendices list the ships of the German High Seas Fleet, the Grand Fleet and the Mediterranean Fleet on the outbreak of war.

This volume is mainly concerned with the Dardanelles operations from their inception as a naval diversion to their development into a major combined operation and its failure. Although the narrative is related from a naval point of view it is necessarily concerned with military movements, but they have been dealt with only in so far as seemed essential to make clear the navy’s part in supporting the army. Purely naval operations treated include the raid on the Yorkshire coast in December 1914 and the Dogger Bank action on 24th January 1915. In a separate cover are ten maps/plans accompanying the text.

This volume deals with events in Home Waters from the spring of 1915 to the Battle of Jutland, 31st May/1st June 1916 which is covered in considerable detail with an analysis of the results comparing ships of the opposing fleets and losses in personnel and ships. It is also concerned with the Dardanelles campaign up to the final evacuation and the launching of the Salonika expedition. It deals with the campaign in Mesopotamia as far as the Battle of Ctesiphon 22-24 November 1915. It also describes the finding and destruction of the Koenigsberg. The author died a few hours after completing the final chapter and the proofing and checking of the narrative was carried out by Lt Col E. Y. Daniel, RM, secretary of the Historical Section of the Committee of Imperial Defence. The task of completing the history was taken over by Henry Newbolt.

Sir Julian Corbett died just as he completed the third volume and Newbolt took over. In the three opening chapters of this volume, however, Sir Julian’s narrative is directly continued from 1st June 1916, discussing the outcome of Jutland and subsequent operations in Home Waters from June 1916 to February 1917. Newbolt begins with a review of what he refers to as secondary operations – E Africa, Cameroons, Mesopotamia, the Baltic, the evacuation of the Serbian Army and the Salonika campaign from January to June 1916. He then covers operations in the Mediterranean between June 1916 and January 1917; describes the activities of enemy raiders, endeavouring to emulate the Emden, such as the Moeve, Leopard, Seeadler and Wolf. The volume concludes with the German introduction of unrestricted submarine warfare and an account of submarine and anti-submarine war in the Mediterranean and in Home Waters during the early part of 1917.

The final volume is very much taken up with the submarine war, beginning with the introduction of the convoy system, which was strongly opposed in some naval quarters; the pros and cons are discussed. The part played by the US navy in the convoy system is also covered and U-boat activity off the American coast. Operations in Home Waters and in the Mediterranean from the end of 1917 are dealt with as well as the blocking of Zeebrugge and Ostend in the war against the U-boats. There are a number of informative appendices providing details of escort forces for convoys, statistics of volume of trade convoyed, allied and enemy shipping losses, RN and RM strengths and casualty figures.

This five -volume history of the part played by the Royal Navy in the Great War is based chiefly on the records of the Historical Section of the Admiralty, with the full help of the German Admiralty. These records include telegrams to and from the Admiralty, reports from officers in command, minutes of proceedings of the War Cabinet and other state papers. It also makes use of allied ministers’ conference records, ships’ logs, signal logs, captains’ and squadron commanders’ despatches as well as battle orders to the fleet and local records of every base and shore station. It contains maps, plans and diagrams of the original which was published between 1920 and 1931. 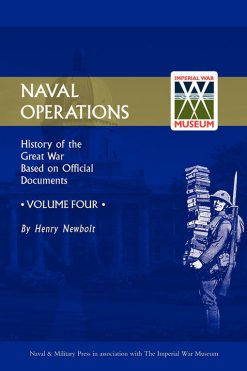 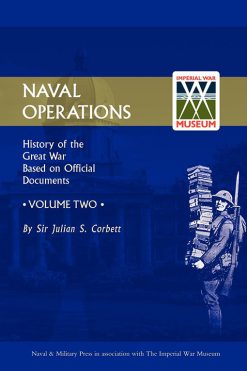 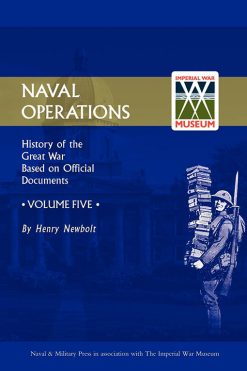 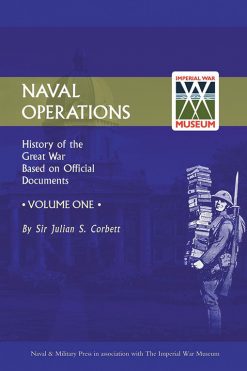 OFFICIAL HISTORY OF THE WAR. NAVAL OPERATIONS – VOLUME I