Magnificent two volume history of the most renowned of all Britain’s African regiments. from its formation in 1890, through its service in Africa in both colonial campaigns and the two world wars, to its disbanding in 1945.

This is a regimental history with a difference, one that is bound up with the history of the British Empire in Africa and the extension and development of British rule in the territories of Somaliland, British East Africa (redesignated Kenya from July 1920), Uganda, Nyasaland and, after 1918, Tanganyika (previously German East Africa). These were the territories that were the recruiting grounds for the KAR to which officers from the British Army were seconded – there were no permanent commissions in the KAR unlike the Indian Army which had its own officer structure. No regiment has ever been more intimately connected with the territory through which it marched and fought, or with the peoples from which it was recruited. It was a unique regiment. The author has arranged the book in five parts: The Campaigns of the Early Regiments; The Consolidation of the Regiment, 1901-1914; The East Africa Campaign, 1914-1918; Internal Security and Reorganization 1914-1939; and The War of 1939-1945.
The story begins with the political background to the British administration in East and Central Africa up to the close of the nineteenth century. During the last decade of that century three regiments were formed which were the forerunners of the K.A.R – The Central African Regiment, The Uganda Rifles and the East African Rifles. These saw action in various expeditions and campaigns, in Mauritius, Somaliland, The Ashanti War, The Gambia Expedition, Expeditions against the Nandi and others. On 1 January 1902 the King’s African Rifles came into being, incorporating the original regiments as battalions, six battalions: 1st and 2nd (Central Africa); 3rd (East Africa); 4th and 5th (Uganda) and 6th (Somaliland) Battalions. The total strength was returned as 4,683 officers and men, including104 British officers. For the new regiment the main operations before WWI were the campaigns against the Mad Mullah of Somaliland involving four expeditions; he wasn’t finally seen off until 1920. During the Great War there were 21 battalions and at peak strength in July 1918 the K.A.R. numbered 1,193 officers, 1,497 British NCOs and 30,658 Africans; casualties amounted to 5,117 with a further 3,039 died of disease. The regiment’s part in the campaign against von Lettow-Vorbeck in East Africa is fully described.
The regiment was again in action during WWII taking part in three separate campaigns: the defeat of the Italians in Somalia and Abyssinia; the occupation of Madagascar against the opposition of the Vichy French; and the reconquest of Burma when, for the first time, K.A.R. battalions fought outside the continent of Africa. This must be one of the best regimental histories ever written.

STORY OF THE FIFTH AUSTRALIAN DIVISION 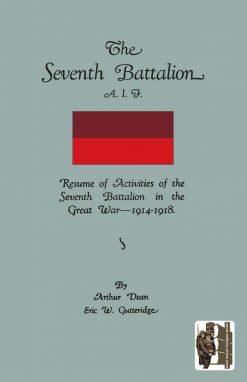