The history of dueling and famous duels. Includes over 100 accounts of duels including that between the Duke of Wellington and the Earl of Winchelsea.

The duel has always engaged the mind and there are so many fictional accounts of these man to man combats, with the mist of dawn swirling on the heath, the crack of a shot, and a distraught female rushing to the side of the mortally wounded and often innocent youngster on the ground, killed by the older and much less attractive combatant.
The truth of the matter is often more prosaic, but these two volumes give the whole history of the subject, tracing dueling back to the field of honour of mediaeval times through to 1841. The first part of the book deals with the earlier events in the history of one-to-one combat, looking at how the rules of dueling developed, and how dueling became a substitute for the joust. It also brings out the connection with wrestling, gladiators, boxing and even female boxers.
There are very good analyses of dueling on the continent as well as in Great Britain, which adds to the value of this book.
The real value of the book is twofold: there is a detailed account of the background to dueling and the various alternative forms of this ultimate trial of courage, and there is an account of the duels fought during the reigns of George II and George IV. Among the latter are details of duels between George Garrick and a Mr Baddeley in 1810, between Charles James Fox and Mr Adam in 1779, between HRH the Duke of York and Colonel Lennox in 1789, between the Duke of Bedford and the Duke of Buckingham in 1822, between the Duke of Wellington and the Earlof Winchelsea in 1829, and between the Earl of Cardigan and Captain Tuckett in 1840, which latter resulted in the trial of the Earl of Cardigan before Parliament in 1841, and the final ban on dueling. 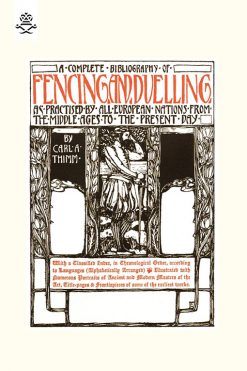 COMPLETE BIBLIOGRAPHY OF FENCING AND DUELLING, AS PRACTISED BY ALL EUROPEAN NATIONS FROM THE MIDDLE AGES TO THE PRESENT DAY