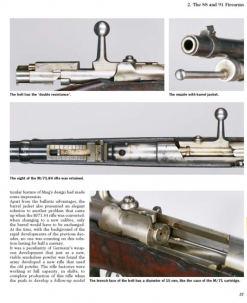 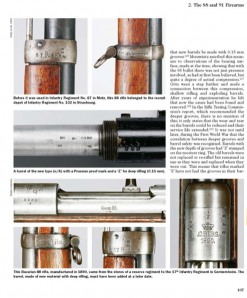 Volume 2 of ‘German Military Rifles’ deals with the 88 and 91 model firearms of the Imperial German Army. There has been no comprehensive work based on original sources dealing with these weapons and their history before now, although they were crucial to the transition from the black powder that had been in use for centuries to the nitrocellulose powder also known as smokeless powder. This change of propellant was a quantum leap in military armament, which changed conditions on the battlefield and within a few years led to the introduction of a less colourful and therefore less conspicuous field uniform

The introduction of a new, more powerful powder and the corresponding weapons took place under enormous time pressure so it was inevitable that there would be initial teething problems with these new products, which were not yet fully developed. There are, to this day, many notions regarding these problems that are either unclear or inaccurate. Like the 1st volume, this book is based on the extensive study of Germany’s archival material and on extant pieces in public and private collections, which has made it possible to present a detailed reconstruction of the actual circumstances.
The 88 model weapons went through two periods of usage: the first began with the hasty rearmament of the German armies around 1890 and ended with the introduction of the 98 models in the years leading up to 1914. It was during the First World War, when a serious shortage of firearms made itself felt, that many of these weapons, which had already been decommissioned, were once again taken out of the depots and reactivated. Both of these periods are covered in this book.
It would have made no sense to divide essential accessories such as cartridge pouches and bayonets, which represent their own areas of collection, between the two volumes and so both are dealt with in this second volume, which also includes chapters on the target weapons and ‘fencing’ rifles that have hitherto been neglected. This volume concludes the trilogy on Imperial German firearms that began with the book: ‘Rifle and Carbine 98’.
Overseas clients please note: Due to excessively high wrapped weight shipping is weighted on this title.