WELLINGTON
The Crossing Of The Gaves And The Battle Of Orthez
This definitive account Looks in depth at the final phase of the Peninsular War when Wellington chased the French across the Pyrenees into France, defeating them again at the Battle of Orthez. Illustrated with early 20th c. photos of the battlefields, and reproduces the Iron Duke’s campaign plans and battlefield orders.

WITH WELLINGTON IN THE PYRENEES
Being An Account Of The Operations Between The Allied Army And The French From July 25 to August 2 1813
After the glorious victory of Vittoria, Wellington followed the retreating French army to the very borders of France itself. The campaign in south-west France in late 1813 and early 1814 was the final campaign of the Peninsular War. An allied army of British, Portuguese and Spanish soldiers under the command of Wellington fought a string of battles against French forces under the command of the able Soult, from the Iberian Peninsula across the Pyrenees and into south-west France ending with the capture of Toulouse and the besieging of Bayonne.

WELLINGTON
The Bidassoa and Nivelle
This volume deals with the Allied armies’ struggle to gain a foothold in France itself in the late summer months of 1813.

Major-General F.C.Beatson CB was born in 1855 and joined the army in 1873. After a period of regimental soldiering he served as an instructor and Professor at the Staff College from 1889-1898. One of his more well-known pupils from that period was Douglas Haig. He served in South Africa 1899-1902 with his regiment and on the Staff, being wounded twice, mentioned in despatches and created a CB. He served as Deputy Adjutant-General in India, 1906-1910 and Director, Personal Services, War Office, August 1914-March 1916. The “Bidassoa and Nivelle” was his thrid and last book, appearing in 1931. General Beatson died in 1933. 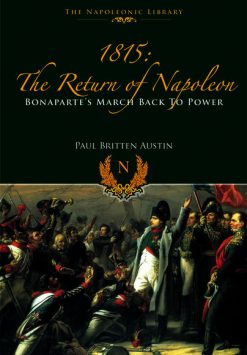 1815: THE RETURN OF NAPOLEON Bonaparte’s March Back to Power