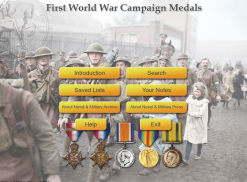 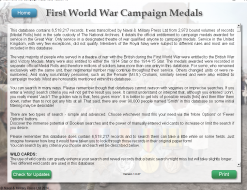 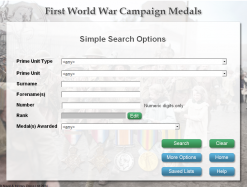 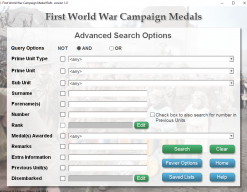 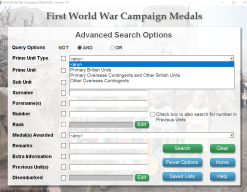 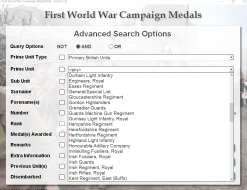 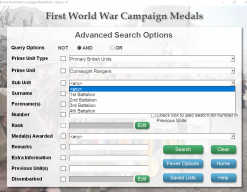 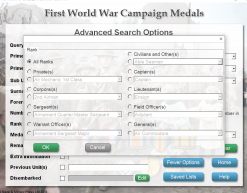 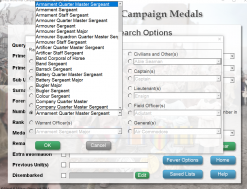 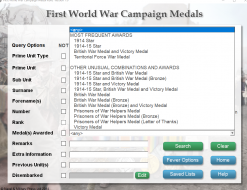 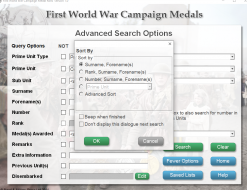 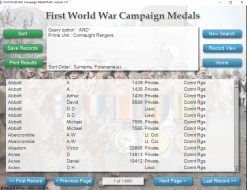 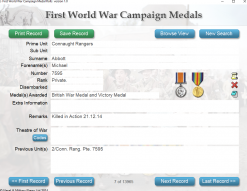 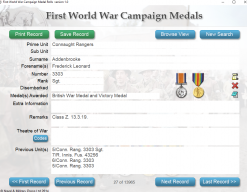 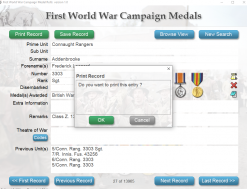 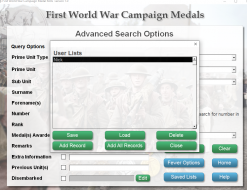 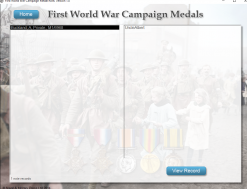 The Naval & Military Press commemorates the centenary of the outbreak of the Great War by listing on this exceptional CD-ROM arguably every British Army serviceman and woman who served their King and Country during the ‘war to end all wars’. From the Recruiting Sergeant-Major with his single award of the British War Medal to the Victoria Cross hero, the soldier slaughtered on the first day of the Somme or the Nursing Sister, you will find their medal details recorded in full on this truly amazing disc.
These records are the nearest we have to a full British Army “Roll-call” for the Great War.
The series of campaign medals issued for the Great War offers the military genealogist a goldmine of information. Many entries give battalion details that enable specific War Diary research to be undertaken which can breathe life, and in some cases death, into an individual soldier’s record.

The information recording soldiers serving with British Forces and their eligibility for campaign medals is contained in the Medal Rolls 1914-1920. The original documents are held by The National Archives, Kew, London under the reference WO329. They have now been digitised by the Naval & Military Press and published for the first time. This now allows examination of these important records without a trip to Kew to view the original printed Rolls.
The Medal Rolls were not damaged by enemy bombing in the Second World War. For this reason these Rolls form the only more or less complete list of soldiers who, by the fact that they were eligible to receive a WW1 medal, can be considered to have “participated” in the First World War.
The Medal Rolls were created as lists of those individuals entitled to one or more campaign medals and list individuals by the military unit they were serving with at the time of their entitlement. The information contained in the listings can provide an additional “remark” or detail for an individual soldier which was hitherto unknown.
As with our Soldiers Died in the Great War disc, all fields of information are searchable, enabling an individual soldier to be located with ease without knowledge of his regiment or corps.

The Medal Rolls were the source material for the Medal Index Cards. During transcription much information was omitted and many errors and corruptions of a soldier’s record were made. Therefore, the Medal Rolls
present a more complete and accurate survey
of a soldier’s military career.

A certificate of medal entitlement, with an individual’s service details, complete with historical information and a photographic reproduction of the medal(s), will be available to print in colour.

The Rolls can contain some or all of the following information for each recipient of a medal:
• Surname
• Forename(s)
• Rank
• Number
• Regiment or Unit
• Battalion or Sub Unit
• Medal Awarded
• Previous service – Unit, rank, number
• Date of Disembarkation
• Theatre of War
• Remarks and Extra Information