Skip to content
Product added!
View basket “LOOKING DOWN ON WAR: EVOLUTION OF AIRBORNE OPERATIONS 1939-1945” has been added to your basket.
Product categories

MICHAEL LEE
18:55 03 Mar 19
I have been a very happy customer of Naval and a Military Press for many years. I have... never been disappointed with their products or very professional service. With easy options for payment and an unrivaled selection of military books, brilliant CD Roms and DVDs, I really can’t imagine why anybody who loves military history would even contemplate going elsewhere.read more
Next Reviews
-84%
The product is already in the wishlist! Browse Wishlist

DESPATCHES FROM THE FRONT: LIBERATING EUROPE D-DAY TO VICTORY IN EUROPE 1944-1945

This volume in the Despatches from the Front series look at the final campaign to liberate Europe from D-day until the final victory over Germany. 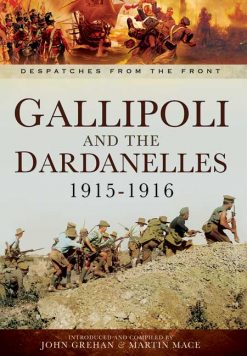 DESPATCHES FROM THE FRONT: GALLIPOLI AND THE DARDANELLES 1915-1916