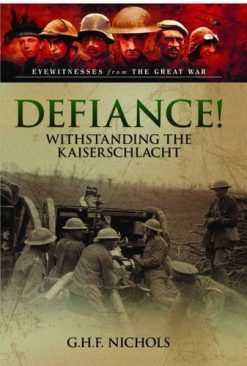 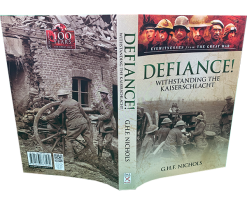 George Nichols was an artillery officer serving with the 82nd Brigade, Royal Field Artillery. He was wounded in 1917, and returned to the guns in March 1918, just in time to experience the fury of the Kaiserschlacht, the great German offensive designed to knock the British army out of the war. Nichols wrote a powerful account of the Kaiser’s last great offensive battle from inside the eye of the storm, and it is one of the few primary source accounts which are told from the often overlooked perspective of the British artillerymen.

Nichols, with wonderful British reserve, records how the men of the Royal Field Artillery steadfastly manned their guns. Nichols survived the onslaught and in 1919, was able to produce a full account of both the retreat and the British counterattack which won back the lost ground.

An independent review from the respected Chris Baker
This book was originally published by William Blackwood in 1919 under the title “Pushed and the return push”. Written by George Nichols, it is a lively, personal account of the experience of 82 Brigade of the Royal Field Artillery from March to October 1918. The original title, while perhaps not suiting today’s book market, is more meaningful as only the first third or so deals with the defensive fighting against the German “Kaiserschlacht” (Operation “Michael”). The majority concerns the brigade’s part in the successful Allied offensives from August 1918 onwards and culminates in the death of the commanding officer Lieutenant-Colonel Austin Thorp DSO at Bousies on 30 October

Not that we know it was Thorp – for the book was presumably either published during a period of censorship or Nichols’ himself decided to disguise individuals and units. Thorp appears only as “the Colonel” and most officers are identified only by an initial of their surname. This reprint cries out for some research work to identify the dramatis personae and give some context: an opportunity missed. That aside, the narrative is full of detail and gives not only an insight into events but how the headquarters of an artillery brigade worked. Nichols’ joined the brigade on 27 February 1918 and was appointed as Orderly Officer. With many personal and even trivial events included in the story, we are taken right into the heart of affairs. I found it a very absorbing and interesting read – especially when seeing the brigade’s war diary (which can be obtained from the National Archives website) alongside.

“Defiance!” will be of particular value to anyone with connections to the brigade or an interest in the 18th (Eastern) Division under whose command it came, but I can also recommend it for those with a wider interest – as long as they can put up with the author’s disguising of names.