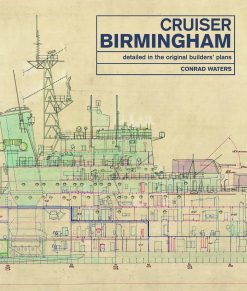 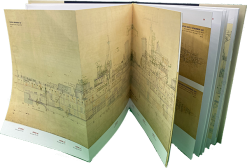 From a series of books featuring full-color reproductions of the famous “admiralty draughts” used by the Royal Navy including: Plans of each deck, 12 transverse sections, and a longitudinal profile. A further set of plans drawn in November 1943 shows the arrangement of the ship from forecastle deck and above.  A number of traditional line drawings, including diagrams of the aircraft and catapult arrangements, fire control positions, rigging layout, and isometric “incident board” plans from 1952 + there are colour diagrams depicting the armour arrangement and the interior of the 6-inch turrets.

The technical details of British warships were recorded in a set of plans produced by the builders on completion of every ship. Known as the as fitted general arrangements, these drawings documented the exact appearance and fitting of the ship as it entered service. They were very large more than 12 feet long for capital ships highly detailed, annotated and labelled, and drawn with exquisite skill in multicoloured inks and washes. Intended to provide a permanent reference for the Admiralty and the dockyards, they represent the acme of the draughtsman s art. Today these plans form part of the incomparable collection of the National Maritime Museum at Greenwich, which is using the latest scanning technology to make digital copies of the highest quality. This book is one of a series based entirely on these draughts which depict famous warships in an unprecedented degree of detail complete sets in full colour, with many close-ups and enlargements that make every aspect clear and comprehensible. Extensive captions point the reader to important features to be found in the plans, and an introduction covers the background to the design. HMS Birmingham was selected for the series because this famous inter war Town class cruiser is unusually well documented. Unusually, three separate sets of plans survive as completed in 1937, as refitted in 1943, and as modernised in 1952 which allows this novel form of anatomy to cover the whole of the ship s long career.
Overseas clients please note: Due to excessively high wrapped weight shipping is weighted on this title. 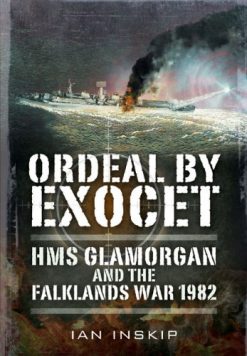 ORDEAL BY EXOCET HMS Glamorgan and the Falklands War 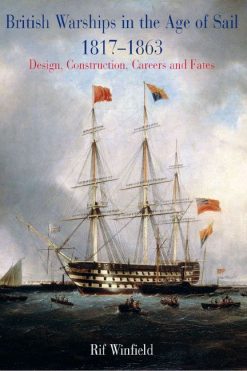 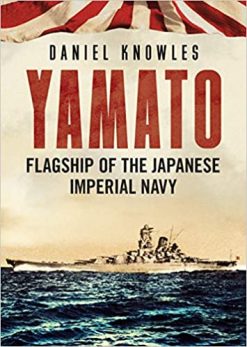