The network of canals stretching from the coast at Gravelines, through St-Omer, Bthune and La Basse, follows the approximate boundary between Artois and Flanders and was, in 1940, the defensive line established on the western edge of the so-called Dunkerque Corridor designed by Lord Gort to provide an evacuation route to the channel coast. This “ Battleground” title is illustrated by over a hundred contemporary and modern photographs and by five car tours and three walks, all of which give the tourist a greater access to the battlefield.

Even before events on the line of the Escaut line had concluded with yet another Allied withdrawal, Lord Gort was diverting units to bolster the Canal Line defenses This is probably the first occasion that the fighting along the Canal Line has been looked at in detail; overlooked by the inevitable withdrawal towards the channel coast, the units deployed along the canal faced some of the stiffest fighting in the whole 1940 France and Flanders campaign. Whole battalions, particularly those in the 2nd Division, were sacrificed as units were thrown into the battle in an attempt to slow down the German advance. The book looks in some detail at the ad hoc nature of the Usherforce and Polforce units, the units of the independent 25 Brigade and the vicious fighting that enveloped the 2nd Division. Time is given also to the notorious massacre of the Royal Norfolks at Louis Creton’s farm near Le Paradis. Material concerning the deployment of units along the Canal Line in 1940 has been found in a variety of sources, including regimental histories and unit war diaries. The author has been fortunate in being able to access a number of personal diaries and accounts from men serving with the independent 25 Brigade and the 2nd Division, which has, in some cases, added to and enhanced the actions taken by those units while deployed on the canal. 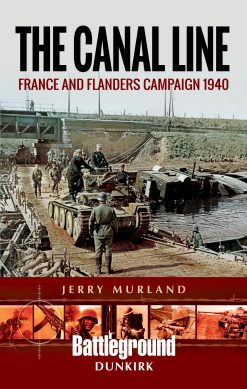