The catastrophic 1940 campaign which caused the downfall of Neville Chamberlain and brought Winston Churchill to power.

T.K. Derry’s official account of the disastrous opening British campaign of the Second World War in April-May 1940, which led to the downfall of Neville Chamberlain and the elevation of Winston Churchill to the Premiership. Derry describes the rival British and German plans to occupy Norway, the source of vital raw materials. He shows how Hitler, far from ‘missing the bus’ in Chamberlain’s contemptuous phrase, struck first, invading by air and sea and catching the British on the hop. Derry details the belated British response, with amphibious operations and landings around Trondheim and Narvik in central and northern Norway. Despite losing half their destroyers to the Royal Navy, Germany’s speedy occupation of the main population centres and the Luftwaffe’s command of the air, made her victory and a humiliating British withdrawal inevitable. The author is unsparing in his analysis of the command and intelligence failures behind Britain’s first major military setback of the war, which had such far-reaching political consequences. Illustrated with 11 general and situation maps, 7 sketch maps and five photographs.

VICTORY IN THE WEST VOLUME I: THE BATTLE OF NORMANDY: HISTORY OF THE SECOND WORLD WAR: UNITED KINGDOM MILITARY SERIES: OFFICIAL CAMPAIGN HISTORY 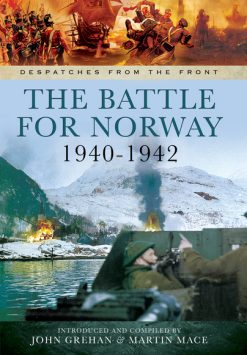