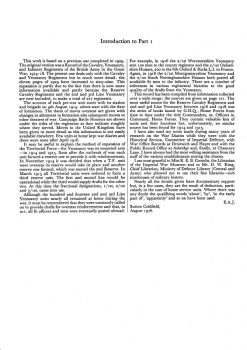 BRITISH REGIMENTS 1914-18 Each Great War battalion, the formations they served in, dates formed & where & when they served.

Valuable source that lists each WW1 battalion, formations they served in, dates formed & where & when they served.

One of the most used and most useful works of reference on the Great War ever published. In this marvellous volume is listed every cavalry and Yeomanry regiment, every battalion of every infantry regiment, Regular, Territorial or other – that existed during the Great War. In every case the location of the unit on 4 August 1914 is given, or the date and place of its formation if raised after the outbreak of war. Its initial disposition, subsequent moves, changes in subordination and final disposal or location on 11 November 1918 are all recorded. Thus, in a masterly and concise form, we have the war service record of 31 regular and 17 reserve cavalry regiments, 57 Yeomanry regiments and their second and third line counterparts and nearly 1,750 infantry battalions. Several appendices contain a mine of information; a table of the infantry regiments showing the number of the different types of battalions each had, regular, reserve, extra reserve, territorial, New Army, garrison etc.; how the New Army battalions were raised; the Training Reserve; list of infantry divisions; summary of battle honours, casualties and VCs of each infantry regiment. Finally, there is a good index.