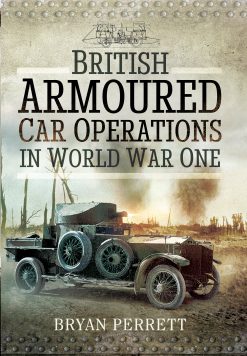 The armoured car came of age during the Great War, despite the static nature of the western front, action in Russia, Mesopotamia and Africa was particularly key as is demonstrated by Perrett in this book. The action in Russia is covered in some detail. It illustrates the potential of the armoured car, as well as the ad hoc way in which the formations developed. Littered with flamboyant and often eccentric characters this is an essential source book for anyone interested in early armoured warfare.

This is a well-written and very readable volume. It details the origins, development and operations of armoured cars used by British forces during World War I. A detailed background gives insight into the origins of the armoured-car genre. The majority of British armoured car operations during WWI occurred in obscure locations far removed from Europe and the Western Front. As a result, the reader is taken into Russia, the Balkans, Iran, the Levant and Africa; into small places and small wars. The relevant details are well-narrated. The chapters relating to the Russian / Balkan experiences of the British armoured car units is particularly interesting, By their free-roaming, almost piratical nature, armoured cars attracted some interesting ‘personalities’. When these individuals make their appearance within the volume, they are treated with sympathy, although their foibles are not overlooked. The volume contains a selection of contemporary and informative photographs.