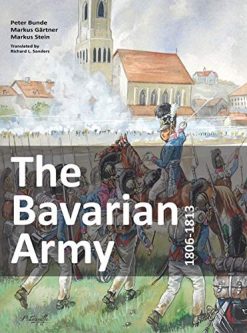 The work was originally published in German as “Die Bayerische Armee 1806-1813” and the authors are true subject matter experts on the Napoleonic Wars, especially the armies of the German states.

During the Napoleon era, the Kingdom of Bavaria among France’s German allied states, provided the largest contingent with 30,000 soldiers and due to its size took part in decisive fighting in the 1809 and 1812 campaigns. In this book, the authors present a comprehensive work about the organisation and individual branches of the Bavarian Army, their uniforms, the regulations for its deployment and the missions of the individual branches in the field, as well as the army’s internal structure. These descriptions are supplemented by accounts of the Bavarians’ combat engagements in the campaigns of 1806-07 against Prussia and Russia, of 1809 against Austria, of 1812 against Russia, as well as of 1813 against Prussia and Russia.